Nicki Minaj’s sister is defending her nephew from online bullies.

Queens rapper Nicki Minaj finally revealed the face of her healthy, bouncy baby boy a couple of days ago, and her loyal legion of Barbs have not been able to contain the joy-filled emotions since then. The chubby 3-month old baby boy was dressed in the latest Versace and even sported an iced out watch to ring in the new milestone. To top it off, his 38-year-old Nicki had nothing but praises for her Papa Bear when she wrote a truly moving caption.

She proceeded to thank the little guy for allowing her the opportunity to be the one who brought him into this world.

“Becoming a mom is by far the most fulfilling job I’ve ever taken on,” she confessed before sending her blessings to all the moms and moms to be. “Sending love to all the superhero mothers out there. Big hugs to all the women who have been pregnant during this challenging time.”

Sadly, even with the love meter almost at maximum, there were still a few persons who proceeded to ridicule Papa Bear. It seems he has very little to worry about since his aunt ensured she was on the prowl and disciplined the persons who had attempted to troll the little guy. The rapper’s younger sister Ming Maraj hopped into the comment section below an unspecified post and had these choice words for a few for one specific Instagram troll.

“You a clown body shaming a child, u know damn well you prolly was a fat baby too,” she penned. “Ur tf mad because u ain’t getting the attention u wish you had, ur mad because ur irrelevant.” Her protective rant also came with a fierce threat aimed at anyone looking to continue the wild and cruel act of ridiculing a baby. 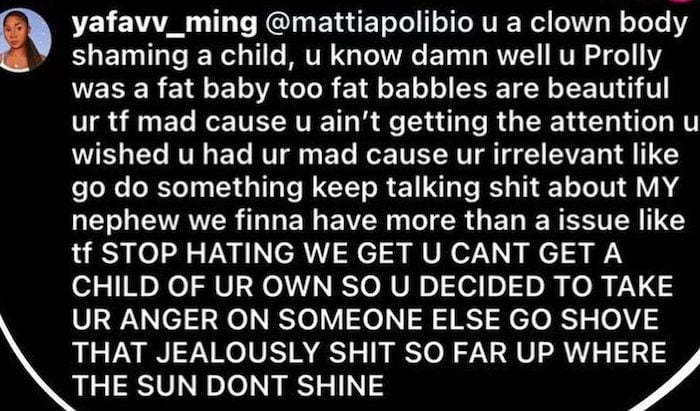